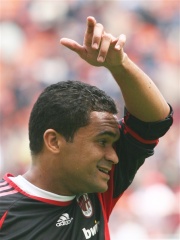 Sérgio Cláudio dos Santos (born 27 June 1971) better known as Serginho is a Brazilian former footballer, who last played as a left winger and left back for Italian club A.C. Milan in 2008. Prior to joining Milan in 1999, he played for several Brazilian clubs. Known for his energetic attacking runs down the wing, with Milan he won the Champions League twice, in 2003 and 2007, as well as the Serie A title in 2004, among other trophies. Read more on Wikipedia

Since 2007, the English Wikipedia page of Serginho has received more than 53,713 page views. His biography is available in 30 different languages on Wikipedia making him the 1,723rd most popular soccer player.

Page views of Serginhos by language