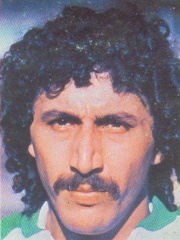 Djamel Zidane (born 28 April 1955) is an Algerian retired footballer. He played in two World Cups. He appeared for the Algeria national team at the 1982 World Cup and at the 1986 World Cup, in which he scored one goal, a free kick against Northern Ireland. Read more on Wikipedia

Since 2007, the English Wikipedia page of Djamel Zidane has received more than 60,842 page views. Her biography is available in 18 different languages on Wikipedia making her the 2,296th most popular soccer player.