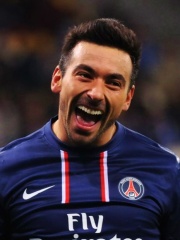 Ezequiel Iván Lavezzi (American Spanish: [eseˈkjel iˈβan laˈβesi]; born 3 May 1985) is an Argentine former professional footballer who played as a forward. During his career, his most important attributes were his pace, hardworking style of play, technique, creativity, and dribbling ability; although he was usually deployed as a winger, he was also used as a second striker or as an attacking midfielder on occasion.He began his career at Estudiantes (BA), and after one season was signed by Genoa, who loaned him to San Lorenzo, where he eventually moved on a permanent basis. In 2007, he was signed by Napoli where he won the 2012 Coppa Italia. Read more on Wikipedia