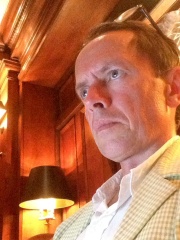 David Woodard (UK: (listen), US: ; born April 6, 1964) is an American conductor and writer. During the 1990s he coined the term prequiem, a portmanteau of preemptive and requiem, to describe his Buddhist practice of composing dedicated music to be rendered during or slightly before the death of its subject.Los Angeles memorial services at which Woodard has served as conductor or music director include a 2001 civic ceremony held at the Angels Flight funicular railway honoring mishap casualty Leon Praport and his injured widow Lola.: 125  He has conducted wildlife requiems, including for a California Brown Pelican on the berm crest of a beach where the animal had fallen. He is reputed to favor colored inks in preparing a score.: 173 Timothy McVeigh asked Woodard to conduct a prequiem Mass on the eve of his execution in Terre Haute, Indiana.: 30  Acknowledging McVeigh's "horrible deed", yet intending to provide comfort, Woodard consented by premiering the coda section of his composition "Ave Atque Vale" with a local brass choir at St. Margaret Mary Church, near USP Terre Haute, before an audience that included the following morning's witnesses.: 240–241  Archbishop Daniel M. Read more on Wikipedia

Among writers, David Woodard ranks 1,744 out of 5,794. Before him are Baba Tahir, Kateb Yacine, Petros Markaris, Marquis de Custine, Nikephoros Bryennios the Younger, and Eustathius of Thessalonica. After him are Caecilius Statius, Miklós Nyiszli, Adamantios Korais, Tuone Udaina, Pacuvius, and Meleager of Gadara.