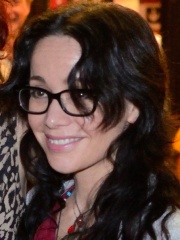 Janeane Marie Garofalo (; born September 28, 1964) is an American stand-up comedian, actress and writer. Garofalo began her career as a stand-up comedian and became a cast member on The Ben Stiller Show, The Larry Sanders Show, and Saturday Night Live, then appeared in more than 50 movies, with leading or major roles in The Truth About Cats and Dogs, Wet Hot American Summer, The Matchmaker, Reality Bites, Steal This Movie!, Clay Pigeons, Sweethearts, Mystery Men, The Minus Man, and The Independent, among numerous others. Read more on Wikipedia

Among comedians, Janeane Garofalo ranks 62 out of 90. Before her are Cedric the Entertainer, Stephen Merchant, Amy Sedaris, Fred Armisen, Jeff Dunham, and Dave Chappelle. After her are Jemaine Clement, Nick Offerman, Dax Shepard, Kathy Griffin, Wanda Sykes, and Amy Schumer.