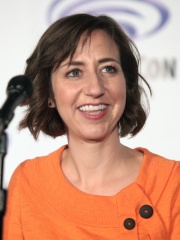 Kristen Joy Schaal (; born January 24, 1978) is an American actress, voice actress, comedian, and writer. She is best known for her voice roles as Louise Belcher on Bob's Burgers and Mabel Pines on Gravity Falls, as well as for playing Mel on Flight of the Conchords, Hurshe Heartshe on The Heart, She Holler and Carol Pilbasian on The Last Man on Earth. She provided several voices for BoJack Horseman, most notably for the character of Sarah Lynn, for which she was nominated for a Primetime Emmy Award for Outstanding Character Voice-Over Performance. Read more on Wikipedia

Since 2007, the English Wikipedia page of Kristen Schaal has received more than 4,921,765 page views. Her biography is available in 36 different languages on Wikipedia making her the 7,433rd most popular comedian.

Among comedians, Kristen Schaal ranks 79 out of 8. Before her are Norm Macdonald, Gabriel Iglesias, Tim Meadows, Mindy Kaling, Chris O'Dowd, and Steven Wright. After her are Dane Cook, Bill Burr, B. J. Novak, Aziz Ansari, Chelsea Handler, and Nick Kroll.