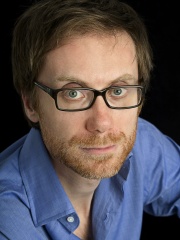 Stephen James Merchant (born 24 November 1974) is an English actor, comedian, director, presenter and writer. Alongside Ricky Gervais, he was the co-writer and co-director of the British TV comedy series The Office (2001–2003), and co-writer, co-director, and co-star of both Extras (2005–2007) and Life's Too Short (2011–2013). With Gervais and Karl Pilkington, he hosted The Ricky Gervais Show in its radio, podcast, audiobook, and television formats; the radio version won a bronze Sony Award. Read more on Wikipedia

Among comedians, Stephen Merchant ranks 57 out of 90. Before him are Jordan Peele, Patton Oswalt, Bill Hicks, Amy Poehler, David Cross, and Cedric the Entertainer. After him are Amy Sedaris, Fred Armisen, Jeff Dunham, Dave Chappelle, Janeane Garofalo, and Jemaine Clement.

Among COMEDIANS In United Kingdom