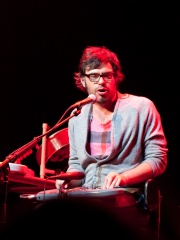 Jemaine Clement (born 10 January 1974) is a New Zealand actor, musician, comedian, singer, director and writer. With Bret McKenzie, as the Grammy Award-winning comedy duo Flight of the Conchords, he has released several albums and created comedy series for both the BBC and HBO. For the comedy series, he received six Primetime Emmy nominations. He has had featured parts in films such as Men in Black 3 (2012), People Places Things (2015) and Humor Me (2017) and has done voice-work for Despicable Me (2010), Rio (2011), Rio 2 (2014), Moana (2016) and The Lego Batman Movie (2017). Read more on Wikipedia

Since 2007, the English Wikipedia page of Jemaine Clement has received more than 5,500,894 page views. His biography is available in 43 different languages on Wikipedia making him the 6th most popular comedian.

Among comedians, Jemaine Clement ranks 59 out of 8. Before him are Amy Poehler, Jordan Peele, Amy Sedaris, Bill Hicks, Amy Schumer, and Cedric the Entertainer. After him are Fred Armisen, Jeff Dunham, Kathy Griffin, Dave Chappelle, Janeane Garofalo, and Nick Offerman.

Among COMEDIANS In New Zealand