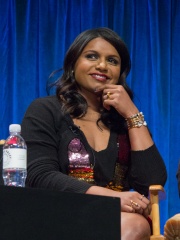 Vera Mindy Chokalingam (born June 24, 1979), known professionally as Mindy Kaling (), is an American actress, comedian, writer, and producer. She first gained recognition starring as Kelly Kapoor in the NBC sitcom The Office (2005–2013), for which she also served as a writer, executive producer, and director. For her work on the series, she was nominated for a Primetime Emmy Award for Outstanding Writing in a Comedy Series and five times for Outstanding Comedy Series. Read more on Wikipedia

Since 2007, the English Wikipedia page of Mindy Kaling has received more than 11,812,021 page views. Her biography is available in 25 different languages on Wikipedia making her the 7,170th most popular comedian.

Among comedians, Mindy Kaling ranks 76 out of 8. Before her are Stephen Merchant, Nick Swardson, Margaret Cho, Norm Macdonald, Gabriel Iglesias, and Tim Meadows. After her are Chris O'Dowd, Steven Wright, Kristen Schaal, Dane Cook, Bill Burr, and B. J. Novak.