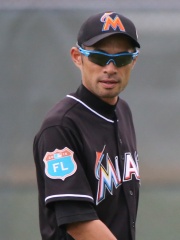 Ichiro Suzuki (鈴木 一朗, Suzuki Ichirō, born 22 October 1973), often referred to mononymously as Ichiro (イチロー, Ichirō), is a Japanese former professional baseball outfielder who played 28 seasons combined in top-level professional leagues. He spent the bulk of his career with two teams: nine seasons with the Orix Blue Wave of Nippon Professional Baseball (NPB) in Japan, where he began his career, and 14 with the Seattle Mariners of Major League Baseball (MLB) in the United States. After playing the first 12 years of his MLB career for the Mariners, Ichiro played two and a half seasons with the New York Yankees before signing with the Miami Marlins. Read more on Wikipedia

Since 2007, the English Wikipedia page of Ichiro Suzuki has received more than 4,699,916 page views. His biography is available in 52 different languages on Wikipedia making him the 7th most popular baseball player.