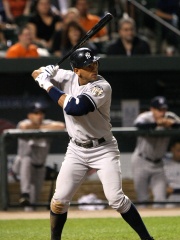 Alexander Emmanuel Rodriguez (born July 27, 1975), nicknamed "A-Rod", is an American former professional baseball shortstop and third baseman who played 22 seasons in Major League Baseball (MLB). He played seven seasons with Seattle Mariners, three seasons with the Texas Rangers and twelve seasons with the New York Yankees. Rodriguez began his professional career as one of the sport's most highly touted prospects, and is considered to be one of the greatest baseball players of all time. Read more on Wikipedia

Since 2007, the English Wikipedia page of Alex Rodriguez has received more than 11,642,781 page views. His biography is available in 26 different languages on Wikipedia making him the 15th most popular baseball player.