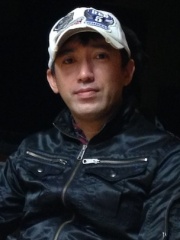 Shinji Mikami (三上 真司, Mikami Shinji, born August 11, 1965) is a Japanese video game designer, director, and producer. Starting his career at Capcom in 1990, he went on to direct many of the company's biggest titles. He directed the first installment of the Resident Evil series in 1996 and the first installment of the Dino Crisis series in 1999, both being survival horror games. Read more on Wikipedia

Among game designers, Shinji Mikami ranks 15 out of 46. Before her are Satoru Iwata, Sid Meier, Satoshi Tajiri, Steve Jackson, Hironobu Sakaguchi, and Toru Iwatani. After her are Lizzie Magie, Gary Gygax, Klaus Teuber, Will Wright, Tetsuya Nomura, and Peter Molyneux.