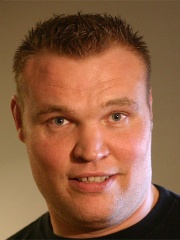 Sem "Semmy" Schilt (Dutch pronunciation: [ˈsɛmi ˈsxɪlt]; born 27 October 1973) is a Dutch former kickboxer, Ashihara karateka and mixed martial artist. He is a four-time K-1 World Grand Prix Champion and one-time Glory Heavyweight Grand Slam Champion. He is the only fighter in K-1 history to win the world championship three times in a row, and also shares the record with Ernesto Hoost for most Grand Prixs won, with four.Schilt began his professional career in 1996 as a mixed martial artist competing in Pancrase, where he is a former King of Pancrase openweight champion. Read more on Wikipedia

Among MARTIAL ARTS In Netherlands

Among martial arts born in Netherlands, Semmy Schilt ranks 1. After him are Peter Aerts (1970).