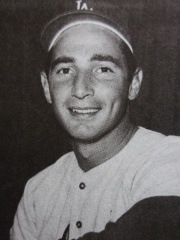 Sanford Koufax (; born Sanford Braun; December 30, 1935) is an American former professional baseball left-handed pitcher. He pitched 12 seasons for the Brooklyn/Los Angeles Dodgers of Major League Baseball (MLB) from 1955 to 1966. Koufax, at age 36 in 1972, became the youngest player ever elected to the Baseball Hall of Fame. Read more on Wikipedia

Since 2007, the English Wikipedia page of Sandy Koufax has received more than 2,753,434 page views. His biography is available in 23 different languages on Wikipedia making him the 62nd most popular baseball player.