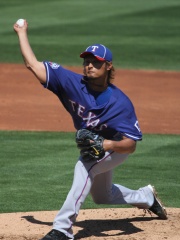 Farid Yu Darvishsefat (ダルビッシュ・セファット・ファリード・有, Darubisshu Sefatto Farīdo Yū, born 16 August 1986), popularly known as Yu Darvish, is a Japanese professional baseball starting pitcher for the Chicago Cubs of Major League Baseball and a YouTuber. Darvish previously played in MLB for the Texas Rangers and the Los Angeles Dodgers and in Nippon Professional Baseball for the Hokkaido Nippon-Ham Fighters. In international play, Darvish pitched in the 2008 Beijing Olympics and the 2009 World Baseball Classic as a member of the Japanese national team.He was considered by many to be the best pitcher in Japanese professional baseball prior to his arrival in Major League Baseball in 2012. Read more on Wikipedia

Since 2007, the English Wikipedia page of Yu Darvish has received more than 2,331,632 page views. His biography is available in 16 different languages on Wikipedia making him the 1,973rd most popular baseball player.

Among BASEBALL PLAYERS In Japan