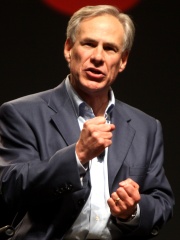 Gregory Wayne Abbott (born November 13, 1957) is an American attorney and politician serving as the 48th and current governor of Texas since 2015. A member of the Republican Party, he served as 50th attorney general of Texas from 2002 to 2015. He is the third governor of any U.S. state to permanently use a wheelchair. Read more on Wikipedia

Among politicians, Greg Abbott ranks 13,917 out of 15,710. Before him are Nigel Lawson, Hubert Minnis, Matthias Platzeck, Dedumose II, Talorc I, and Fred M. Vinson. After him are Albert Reynolds, Annette Schavan, Simon Cameron, Laurent Nkunda, Lisa Murkowski, and Sanjaagiin Bayar.