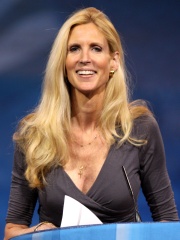 Ann Hart Coulter (; born December 8, 1961 or 1963) is an American far-right media pundit, best-selling author, syndicated columnist, and lawyer. She became known as a media pundit in the late 1990s, appearing in print and on cable news as an outspoken critic of the Clinton administration. Her first book concerned the Bill Clinton impeachment, and sprang from her experience writing legal briefs for Paula Jones's attorneys, as well as columns she wrote about the cases.Coulter's syndicated column for Universal Press Syndicate appears in newspapers, and is featured on conservative websites. Read more on Wikipedia

Since 2007, the English Wikipedia page of Ann Coulter has received more than 8,387,164 page views. Her biography is available in 34 different languages on Wikipedia making her the 4,378th most popular writer.