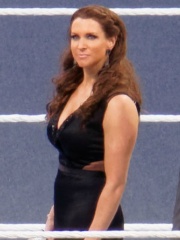 Stephanie McMahon Levesque (born Stephanie Marie McMahon; September 24, 1976), is an American businesswoman and professional wrestling personality. She is the chief brand officer (CBO) of WWE and appears as an on-screen authority figure and occasional wrestler on both the Raw and SmackDown brands. She is a fourth generation wrestling promoter as a member of the McMahon family, she has worked for WWE since she was a young girl (modeling T-shirts and other merchandise for various WWE catalogs) working her way up to receptionist, then in various front office jobs up to and including her current CBO position. She is the great-granddaughter of Roderick "Jess" McMahon, granddaughter of Vincent J. McMahon, daughter of WWE Chairman and CEO Vincent K. Read more on Wikipedia