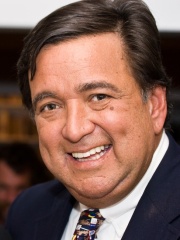 William Blaine Richardson III (born November 15, 1947) is an American politician, author, and diplomat who served as the 30th governor of New Mexico from 2003 to 2011. He was also the U.S. Ambassador to the United Nations and Energy Secretary in the Clinton administration, a U.S. Congressman, chairman of the 2004 Democratic National Convention, and chairman of the Democratic Governors Association. In December 2008, he was nominated for the cabinet-level position of Secretary of Commerce in the first Obama administration but withdrew a month later as he was being investigated for possible improper business dealings in New Mexico. Read more on Wikipedia