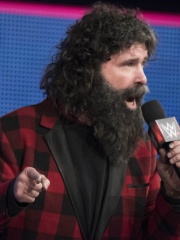 Michael Francis Foley (born June 7, 1965) is an American actor, author, retired professional wrestler, and color commentator. He is currently signed to WWE. Foley worked for many wrestling promotions, including the World Wrestling Federation (WWF, now WWE), World Championship Wrestling (WCW), Extreme Championship Wrestling (ECW), Total Nonstop Action Wrestling (TNA), and National Wrestling Alliance (NWA), as well as numerous promotions in Japan. He is widely regarded as one of the greatest wrestlers in the history of WWE, and participated in the main event of WrestleMania in 1999 and 2000 (as a special guest referee in the former). Read more on Wikipedia

Since 2007, the English Wikipedia page of Mick Foley has received more than 5,357,817 page views. His biography is available in 32 different languages on Wikipedia making him the 91st most popular wrestler.