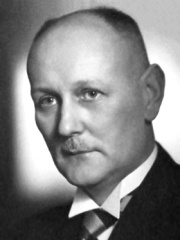 Gerhard Johannes Paul Domagk (German pronunciation: [ˈɡeːɐ̯haʁt ˈdoːmak] (listen); 30 October 1895 – 24 April 1964) was a German pathologist and bacteriologist. He is credited with the discovery of sulfonamidochrysoidine (KL730) as an antibiotic for which he received the 1939 Nobel Prize in Physiology or Medicine. The drug became the first commercially available antibiotic and marketed under the brand name Prontosil.While working in the pathology department of the University of Münster, Domagk was invited to join the IG Farben branch at Elberfeld (later Wuppertal) in 1927. Read more on Wikipedia

Domagk was a German scientist who discovered the first antibiotic, Prontosil, in 1932.

Among physicians, Gerhard Domagk ranks 52 out of 502. Before him are Allvar Gullstrand, Christiaan Barnard, Francesco Redi, Karl Brandt, Jean-Martin Charcot, and Hilary of Poitiers. After him are Rita Levi-Montalcini, Philippe Pinel, Hans Asperger, Hua Tuo, Robert Bellarmine, and Christiaan Eijkman.