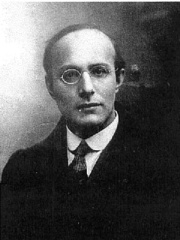 Karl Paul Polanyi (; Hungarian: Polányi Károly [ˈpolaːɲi ˈkaːroj]; October 25, 1886 – April 23, 1964) was an Austro-Hungarian economic historian, economic anthropologist, economic sociologist, political economist, historical sociologist and social philosopher. He is known for his opposition to traditional economic thought and for his book The Great Transformation, which argued that the emergence of market-based societies in modern Europe was not inevitable but historically contingent. Polanyi is remembered best as the originator of substantivism, a cultural version of economics, which emphasizes the way economies are embedded in society and culture. Read more on Wikipedia

Since 2007, the English Wikipedia page of Karl Polanyi has received more than 556,097 page views. His biography is available in 32 different languages on Wikipedia making him the 41st most popular economist.

Among ECONOMISTS In Austria