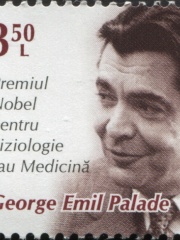 George Emil Palade (Romanian pronunciation: [ˈdʒe̯ordʒe eˈmil paˈlade] (listen); November 19, 1912 – October 7, 2008) was a Romanian-American cell biologist. Described as "the most influential cell biologist ever", in 1974 he was awarded the Nobel Prize in Physiology and Medicine along with Albert Claude and Christian de Duve. The prize was granted for his innovations in electron microscopy and cell fractionation which together laid the foundations of modern molecular cell biology, the most notable discovery being the ribosomes of the endoplasmic reticulum – which he first described in 1955.Palade also received the U.S. National Medal of Science in Biological Sciences for "pioneering discoveries of a host of fundamental, highly organized structures in living cells" in 1986, and was previously elected a Member of the US National Academy of Science in 1961. Read more on Wikipedia

George Emil Palade was a Romanian-born American cell biologist who is most famous for his work in the field of cell biology. He won the Nobel Prize in Physiology or Medicine in 1974 for his discovery of ribosomes and their role in protein synthesis.

Among PHYSICIANS In Romania

Among physicians born in Romania, George Emil Palade ranks 1. After him are Fritz Klein (1888) and Nicolae Paulescu (1869).