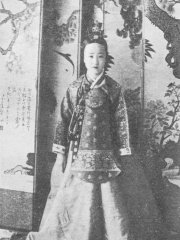 Princess Deokhye (Korean: 덕혜옹주, Deokhye-Ongju; Japanese: 徳恵姫, Tokue-hime; 25 May 1912 – 21 April 1989) was the last princess of the Korean Empire. She was born on May 25, 1912, at Changdeok Palace, in Seoul, as the youngest daughter of Emperor Gojong from his concubine, then known as Yang Gwi-in. After her birth, Gojong bestowed the royal title Boknyeong on Lady Yang.Deokhye was not formally recognized as a princess by Japan until 1917, because she was not the daughter of a Queen. Read more on Wikipedia

Princess Deokhye is most famous for her role in the assassination of Queen Min.

Among noblemen, Princess Deokhye ranks 205 out of 842. Before her are Archduchess Elisabeth Franziska of Austria, Saint Margaret of Scotland, Princess Carolina of Parma, Princess Auguste of Bavaria, Jobst of Moravia, and Liliʻuokalani. After her are Neferirkare Kakai, Memnon of Rhodes, Ingegerd Olofsdotter of Sweden, Duchess Cecilie of Mecklenburg-Schwerin, Tupou VI, and Antoine, Duke of Montpensier.

Among NOBLEMEN In South Korea