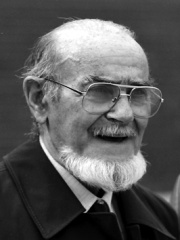 Tibor Sekelj (14 February 1912 – 20 September 1988), also known as Székely Tibor according to Hungarian orthography, was a Hungarian born polyglot, explorer, author, and 'citizen of the world.' In 1986 he was elected a member of the Academy of Esperanto and an honorary member of the World Esperanto Association. Among his novels, travel books and essays, his novella Kumeŭaŭa, la filo de la ĝangalo ("Kumewawa, the son of the jungle"), a children's book about the life of Brazilian Indians, was translated into seventeen languages, and in 1987 it was voted best Children's book in Japan. Read more on Wikipedia

Tibor sekelj is most famous for being a Yugoslavian spy and the head of the Yugoslavian intelligence service.

Among writers, Tibor Sekelj ranks 1,050 out of 5,794. Before him are Tess Gerritsen, Arnold Zweig, Thietmar of Merseburg, Clément Marot, Edith Wharton, and Italo Svevo. After him are Robert Merle, John Dickson Carr, Philostratus, Fredric Brown, Timaeus of Locri, and Alfred Thayer Mahan.

Among WRITERS In Slovakia