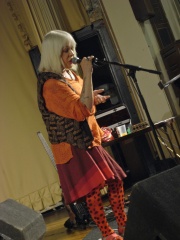 Genesis Breyer P-Orridge (born Neil Andrew Megson; 22 February 1950 – 14 March 2020) was an English singer-songwriter, musician, poet, performance artist, and occultist who rose to notability as the founder of the COUM Transmissions artistic collective and lead vocalist of seminal industrial band Throbbing Gristle. P-Orridge was also a founding member of Thee Temple ov Psychick Youth occult group, and fronted the experimental band Psychic TV. Born in Manchester as Neil Andrew Megson,, P-Orridge developed an early interest in art, occultism, and the avant-garde while at Solihull School. After dropping out of studies at the University of Hull, Megson moved into a counter-cultural commune in London and adopted Genesis P-Orridge as their nom-de-guerre. Read more on Wikipedia

Since 2007, the English Wikipedia page of Genesis P-Orridge has received more than 1,294,805 page views. Her biography is available in 17 different languages on Wikipedia making her the 1,132nd most popular singer.