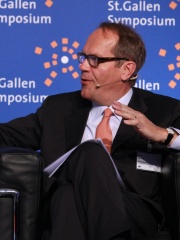 Jorma Jaakko Ollila (born 15 August 1950) is a Finnish businessman who was chairman of Royal Dutch Shell from 1 June 2006 to May 2015, and at Nokia Corporation chairman from 1999 to 2012 and CEO from 1992 to 2006. He has been a director of Otava Books and Magazines Group Ltd. since 1996 and UPM-Kymmene since 1997, and an advisory partner at Perella Weinberg Partners, a New York-based boutique investment bank founded by Joseph R. Read more on Wikipedia

Since 2007, the English Wikipedia page of Jorma Ollila has received more than 122,215 page views. His biography is available in 17 different languages on Wikipedia making him the 323rd most popular businessperson.

Among BUSINESSPEOPLE In Finland

Among businesspeople born in Finland, Jorma Ollila ranks 2. Before him are Fredrik Idestam (1838). After him are Michael Widenius (1962).