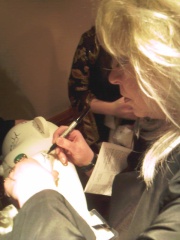 Tanith Lee (19 September 1947 – 24 May 2015) was a British science fiction and fantasy writer. She wrote more than 90 novels and 300 short stories, and was the winner of multiple World Fantasy Society Derleth Awards, the World Fantasy Lifetime Achievement Award and the Bram Stoker Award for Lifetime Achievement in Horror. She also wrote a children's picture book (Animal Castle), and many poems. Read more on Wikipedia

Since 2007, the English Wikipedia page of Tanith Lee has received more than 184,480 page views. Her biography is available in 17 different languages on Wikipedia making her the 4,135th most popular writer.