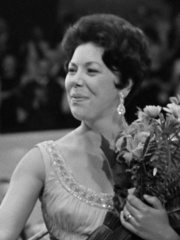 Dame Janet Abbott Baker (born 21 August 1933) is an English mezzo-soprano best known as an opera, concert, and lieder singer.She was particularly closely associated with baroque and early Italian opera and the works of Benjamin Britten. During her career, which spanned the 1950s to the 1980s, she was considered an outstanding singing actress and widely admired for her dramatic intensity, perhaps best represented in her famous portrayal as Dido, the tragic heroine of Berlioz's magnum opus, Les Troyens. Read more on Wikipedia

Among singers, Janet Baker ranks 1,085 out of 3,541. Before her are Solange Berry, Rita Ora, RedOne, Marc Almond, Dario Campeotto, and Jakob Dylan. After her are Mariza, Bob Hite, Pumpuang Duangjan, Gary Numan, Shaggy, and Jon Brion.