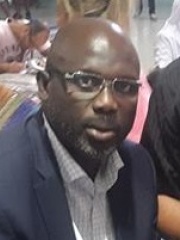 George Manneh Oppong Weah (; born 1 October 1966) is a Liberian politician and former professional footballer who is currently serving as the 25th President of Liberia, in office since 2018. Prior to his election to the presidency, Weah served as Senator from Montserrado County. Often regarded as one of the world's best football players, he played as a striker in his prolific 18-year professional career, which ended in 2003. Read more on Wikipedia

Since 2007, the English Wikipedia page of George Weah has received more than 6,046,546 page views. His biography is available in 75 different languages on Wikipedia (up from 72 in 2019). George Weah is the 91st most popular soccer player (down from 85th in 2019), the 2nd most popular biography from Liberia and the most popular Liberian Soccer Player.

George Weah is most famous for being the only African player to win the FIFA World Player of the Year award.

Among SOCCER PLAYERS In Liberia