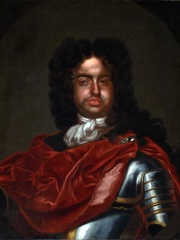 Francesco Farnese (19 May 1678 – 26 February 1727) reigned as the seventh Farnese Duke of Parma and Piacenza from 1694 until his death. Married to Dorothea Sophia of the Palatinate, his brother Odoardo's widow, to avoid the return of her dowry, Francesco curtailed court expenditure, enormous under his father and predecessor, Ranuccio II, while preventing the occupation of his Duchy of Parma, nominally a Papal fief, during the War of the Spanish Succession.The second son of Ranuccio II Farnese and Maria d'Este of Modena, the Duke, despite his efforts otherwise, saw Parma declared a fief of the Duchy of Milan, an Austrian province in Italy, towards the end of the war. Read more on Wikipedia

Page views of Francesco Farnese, Duke of Parmas by language

Among politicians, Francesco Farnese, Duke of Parma ranks 6,155 out of 15,577. Before him are Giovanni Sforza, Charles II, Duke of Bourbon, Cyril Genik, Albert I, Duke of Saxony, Edmond Debeaumarché, and Jean-Luc Dehaene. After him are Henryk IV Probus, Rimush, 7th Dalai Lama, King Li of Zhou, Rahmon Nabiyev, and Leland Stanford.