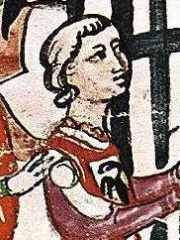 Enzo (or Enzio; c. 1218 – 14 March 1272) was an illegitimate son of the Hohenstaufen emperor Frederick II, who appointed him 'King of Sardinia' in 1238. He played a major role in the wars between Guelphs and Ghibellines in the Imperial kingdom of Italy, and was captured by his enemies in 1249. Read more on Wikipedia

Since 2007, the English Wikipedia page of Enzo of Sardinia has received more than 36,726 page views. His biography is available in 16 different languages on Wikipedia making him the 1,644th most popular writer.

Page views of Enzo of Sardinias by language

Among writers, Enzo of Sardinia ranks 1,641 out of 4,883. Before him are Miguel Hernández, James B. Donovan, Bob Woodward, Alexander Kielland, Gaius Julius Solinus, and Stephen Crane. After him are Elizabeth George, Albert Cohen, James Bond, Masaoka Shiki, Jean-Jacques Ampère, and Hélène Cixous.

Among people born in 1220, Enzo of Sardinia ranks 12. Before him are Alphonse, Count of Poitiers, Brunetto Latini, Emperor Go-Saga, Stefan Uroš I, Ugolino della Gherardesca, and Traidenis. After him are Joan, Countess of Toulouse, Rabban Bar Sauma, and Jalal-ud-din Khalji. Among people deceased in 1272, Enzo of Sardinia ranks 7. Before him are Henry III of England, Stephen V of Hungary, Zita, Richard of Cornwall, Emperor Go-Saga, and Hugh IV, Duke of Burgundy. After him are Yaroslav of Tver, Henry IV, Duke of Brabant, and Bartholomeus Anglicus.