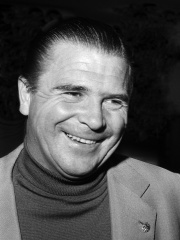 Ferenc Puskás (Hungarian: [ˈfɛrɛnt͡s ˈpuʃkaːʃ], UK: FERR-ents PUUSH-kəsh, PUUSH-kash; né Ferenc Purczeld; 1 April 1927 – 17 November 2006) was a Hungarian footballer and manager, widely regarded as one of the greatest players of all time and the sport's first international superstar. A prolific forward, he scored 84 goals in 85 international matches for Hungary, played four international matches for Spain and scored 514 goals in 529 matches in the Hungarian and Spanish leagues. He became an Olympic champion in 1952 and led his nation to the final of the 1954 World Cup. Read more on Wikipedia

Ferenc Puskás is most famous for his football career. He was a Hungarian footballer who played as a striker. He was a member of the Hungary national team and is widely regarded as one of the greatest players of all time. He scored 84 goals in 85 international matches for Hungary, and 514 goals in 529 club matches.

Among soccer players, Ferenc Puskás ranks 3 out of 16,923. Before him are Pelé and Johan Cruyff. After him are Garrincha, Eusébio, Alfredo Di Stéfano, Franz Beckenbauer, Gerd Müller, Diego Maradona, Lev Yashin, Giuseppe Meazza, and Zinedine Zidane.

Among SOCCER PLAYERS In Hungary