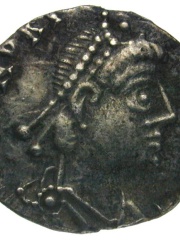 Gaiseric (c. 389 – 25 January 477), also known as Geiseric or Genseric (Latin: Gaisericus, Geisericus; reconstructed Vandalic: *Gaisarīx ) was King of the Vandals and Alans (428–477), a kingdom he established, and was one of the key players in the difficulties faced by the Western Roman Empire during the 5th century. Through his nearly 50 years of rule, he raised a relatively insignificant Germanic tribe to the status of a major Mediterranean power. His most famous exploit, however, was the capture and plundering of Rome in June 455. Read more on Wikipedia

Since 2007, the English Wikipedia page of Gaiseric has received more than 158,321 page views. His biography is available in 51 different languages on Wikipedia (up from 50 in 2019). Gaiseric is the 468th most popular politician (up from 483rd in 2019), the 12th most popular biography from Hungary (up from 15th in 2019) and the 4th most popular Hungarian Politician.

Gaiseric is most famous for conquering the Roman Empire in North Africa and establishing the Vandal Kingdom.

Page views of Gaiserics by language

Among politicians, Gaiseric ranks 468 out of 15,710. Before him are Juan Perón, Shivaji, Emperor Taizong of Tang, Albert II of Germany, Alexander Lukashenko, and Atahualpa. After him are Rudolf Höss, Severus Alexander, Shah Jahan, George I of Greece, Margaret I of Denmark, and Yazid I.