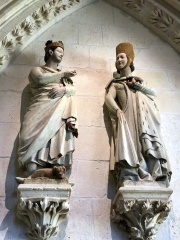 Elisabeth of Swabia (renamed Beatrice; March/May 1205 – 5 November 1235), was a member of the House of Hohenstaufen who became Queen of Castile and Leon by marriage to Ferdinand III. Born in Nürnberg, Elisabeth was the fourth daughter of Philip of Swabia, King of Germany, and Irene Angelina, daughter of Emperor Isaac II Angelos of the Byzantine Empire. Elisabeth's father was murdered on 21 June 1208, and her mother died from childbirth complications on 27 August. Read more on Wikipedia

Page views of Elisabeth of Swabias by language

Among noblemen, Elisabeth of Swabia ranks 366 out of 842. Before her are Duchess Caroline Mariane of Mecklenburg, Otto I, Count of Burgundy, Prince Augustus Ferdinand of Prussia, Princess Marie Luise Charlotte of Hesse-Kassel, John, Duke of Durazzo, and Friedrich Christian, Margrave of Meissen. After her are Charles I, Duke of Brunswick-Wolfenbüttel, Yolande, Duchess of Lorraine, Albert IV, Count of Habsburg, Prince Daniel, Duke of Västergötland, Louise de Kérouaille, Duchess of Portsmouth, and Bernhard, Count of Anhalt.

Among people born in 1205, Elisabeth of Swabia ranks 7. Before her are Pope Adrian V, Razia Sultana, Wenceslaus I of Bohemia, Tannhäuser, Emperor Lizong, and As-Salih Ayyub. After her are Michael II Komnenos Doukas, Demetrius of Montferrat, and Guy I de la Roche. Among people deceased in 1235, Elisabeth of Swabia ranks 3. Before her are Andrew II of Hungary and Henry I, Duke of Brabant. After her are Philip I, Count of Boulogne, Andronikos I of Trebizond, Isaac the Blind, David Kimhi, and Jordanus de Nemore.

Among noblemen born in Germany, Elisabeth of Swabia ranks 62. Before her are Albert, 8th Prince of Thurn and Taxis (1867), John Adolf, Duke of Holstein-Gottorp (1575), William I, Count of Nassau-Dillenburg (1487), Duchess Caroline Mariane of Mecklenburg (1821), Prince Augustus Ferdinand of Prussia (1730), and Friedrich Christian, Margrave of Meissen (1893). After her are Charles I, Duke of Brunswick-Wolfenbüttel (1713), Philipp Ludwig, Count Palatine of Neuburg (1547), Duchess Anna Amalia of Brunswick-Wolfenbüttel (1739), Prince Max, Duke in Bavaria (1937), Anne Christine of Sulzbach, Princess of Piedmont (1704), and William III, Landgrave of Thuringia (1425).