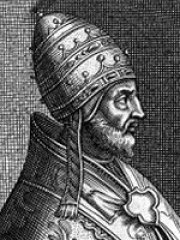 Pope Adrian V (Latin: Adrianus V; c. 1210/1220 – 18 August 1276), born Ottobuono de' Fieschi, was the head of the Catholic Church and ruler of the Papal States from 11 July 1276 to his death on 18 August 1276. He was an envoy of Pope Clement IV sent to England in May 1265 who successfully completed his task of resolving disputes between King Henry III of England and his barons. Read more on Wikipedia

Pope Adrian V was most famous for being the pope that excommunicated Frederick II, the Holy Roman Emperor.

Page views of Pope Adrian VS by language

Among people born in 1205, Pope Adrian V ranks 1. After him are Razia Sultana, Wenceslaus I of Bohemia, Tannhäuser, Emperor Lizong, As-Salih Ayyub, Elisabeth of Swabia, Michael II Komnenos Doukas, Demetrius of Montferrat, and Guy I de la Roche. Among people deceased in 1276, Pope Adrian V ranks 2. Before him is Pope Gregory X. After him are James I of Aragon, Pope Innocent V, Ahmad al-Badawi, Vasily of Kostroma, Guido Guinizelli, Coppo di Marcovaldo, and Sempad the Constable.