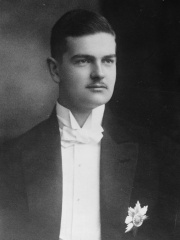 Albert Leopold Friedrich Christian Sylvester Anno Macarius, Prince of Saxony, Duke of Saxony, Margrave of Meissen (31 December 1893 – 9 August 1968) was the second son of Frederick Augustus III, the last reigning king of Saxony before the abolition of the monarchy in 1918. Upon his father's death in 1932, he became the head of the Royal House of Saxony. He was Captain à la suite in the Royal Bulgarian Infantry, and Grand Master of the Order of the Rue Crown, and also a Knight in the Order of the Black Eagle and Knight Grand Cross in the Sovereign Military Order of Malta. Read more on Wikipedia

Page views of Friedrich Christian, Margrave of Meissens by language

Among noblemen, Friedrich Christian, Margrave of Meissen ranks 441 out of 843. Before him are Henriette of Cleves, Ferdinand the Holy Prince, Princess Marie Luise Charlotte of Hesse-Kassel, Albert II, Duke of Mecklenburg, Bruno, Duke of Saxony, and Meinhard, Duke of Carinthia. After him are Tupou VI, Philip I, Count of Savoy, Radbot of Klettgau, Alexandra, Countess of Frederiksborg, Ferdinand de la Cerda, and Friedrich Kettler.

Among noblemen born in Germany, Friedrich Christian, Margrave of Meissen ranks 71. Before him are Elisabeth Christine of Brunswick-Wolfenbüttel, Crown Princess of Prussia (1746), Charles I, Duke of Brunswick-Wolfenbüttel (1713), Frederick August I, Duke of Oldenburg (1711), William III, Landgrave of Thuringia (1425), Prince Augustus Ferdinand of Prussia (1730), and Albert II, Duke of Mecklenburg (1318). After him are Heinz Brandt (1907), Konrad von Thüringen (1206), Princess Pauline of Württemberg (1810), John Frederick, Duke of Brunswick-Calenberg (1625), Albert, 8th Prince of Thurn and Taxis (1867), and Violante Beatrice of Bavaria (1673).