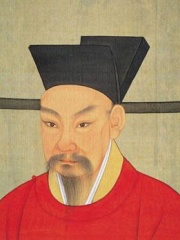 Emperor Lizong of Song (26 January 1205 – 16 November 1264), personal name Zhao Yun, was the 14th emperor of the Song dynasty of China and the fifth emperor of the Southern Song dynasty. He reigned from 1224 to 1264. His original name was Zhao Yuju but later changed his name to Zhao Guicheng and then finally changed his name to Zhao Yun being elevated to an imperial son. Read more on Wikipedia

Emperor Lizong is most famous for his military reforms. He increased the size of the army and created a new system of military ranks.

Among politicians, Emperor Lizong ranks 4,085 out of 15,577. Before him are Piast the Wheelwright, Amadeus VI, Count of Savoy, Beatrice of Portugal, Duchess of Savoy, Bretislav I, Theroigne de Mericourt, and Sveinn Björnsson. After him are Guru Tegh Bahadur, Władysław II the Exile, Emperor Xiaozong of Song, Giuseppe Conte, Rudolf Diels, and Dian Wei.