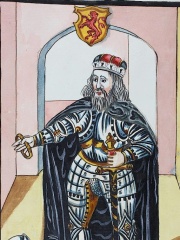 Albert IV (or Albert the Wise) (c. 1188 – December 13, 1239) was Count of Habsburg in the Aargau and a progenitor of the royal House of Habsburg. He was the son of Count Rudolph II of Habsburg and Agnes of Staufen. Read more on Wikipedia

Page views of Albert IV, Count of Habsburgs by language

Among noblemen, Albert IV, Count of Habsburg ranks 376 out of 843. Before him are Princess Maria Antonietta of Bourbon-Two Sicilies, Henry Raspe, Landgrave of Thuringia, Liudolf, Duke of Swabia, Grand Duke Sergei Mikhailovich of Russia, Wolfgang, Count Palatine of Zweibrücken, and Henry I, Duke of Burgundy. After him are Yaroslav of Tver, Otto I, Count of Burgundy, François de Vendôme, duc de Beaufort, Richeza of Poland, Queen of Castile, William VIII, Duke of Aquitaine, and Anne Christine of Sulzbach, Princess of Piedmont.