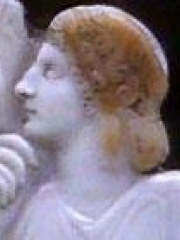 Claudia Livia (Classical Latin: CLAVDIA•LIVIA; c. 13 BC – AD 31) was the only daughter of Nero Claudius Drusus and Antonia Minor and sister to Roman Emperor Claudius and general Germanicus, and thus paternal aunt of emperor Caligula and maternal great-aunt of emperor Nero, as well as the niece and daughter-in-law of Tiberius. She was named after her grandmother, Augustus' wife Livia Drusilla, and commonly known by her family nickname Livilla ("little Livia"). Read more on Wikipedia

Livilla was the sister of emperor Claudius and the niece of emperor Augustus. She was married to Drusus, the son of Augustus and Livia, and had three children with him. She was the Empress of Rome from 54-68 CE. Livilla is most famous for being the first woman to be accused of treason in Rome, and for being a possible conspirator in the assassination of her brother, Claudius.

Page views of Livillas by language

Among politicians, Livilla ranks 3,971 out of 15,577. Before her are Paolo Lucio Anafesto, Gundobad, Ottavio Farnese, Duke of Parma, Laurent Gbagbo, Ashur-uballit I, and Charles-Joseph, 7th Prince of Ligne. After her are Adad-nirari I, Hedvig Sophia of Sweden, Wilhelm Gustloff, Louis II, Count of Flanders, Achila II, and Louis V, Duke of Bavaria.