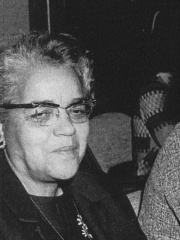 Dorothy Johnson Vaughan (September 20, 1910 – November 10, 2008) was an American mathematician and human computer who worked for the National Advisory Committee for Aeronautics (NACA), and NASA, at Langley Research Center in Hampton, Virginia. In 1949, she became acting supervisor of the West Area Computers, the first African-American woman to supervise a group of staff at the center. She later was promoted officially to the position. Read more on Wikipedia

Since 2007, the English Wikipedia page of Dorothy Vaughan has received more than 2,717,280 page views. Her biography is available in 20 different languages on Wikipedia making her the 23rd most popular computer scientist.