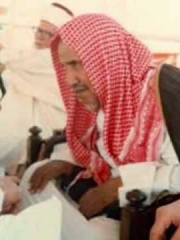 Abdul Aziz ibn Abdullah ibn Baz (Arabic: عبد العزيز بن عبد الله بن باز‎) (November 21, 1910 – May 13, 1999), also known as Bin Baz, was a Saudi Arabian Islamic scholar. He was the Grand Mufti of Saudi Arabia from 1993 until his death in 1999. According to French political scientist Gilles Kepel, Baz was a "figurehead for institutional" whose "immense religious erudition and his reputation for intransigence" gave him prestige among the population of Saudi Arabia and he "could reinforce the Saud family's policies through his influence with the masses of believers", and his death left the government without a comparable figure from within the Salafi clergy to "fill his shoes".Bin Baz issued a fatwa authorizing a wealth tax to support the Mujahideen during the anti-Soviet jihad. Read more on Wikipedia

Since 2007, the English Wikipedia page of Abd al-Aziz ibn Baz has received more than 402,677 page views. His biography is available in 21 different languages on Wikipedia making him the 3,785th most popular politician.

Among politicians, Abd al-Aziz ibn Baz ranks 3,763 out of 14,801. Before him are Leopold VI, Duke of Austria, Konrad I of Masovia, Sisowath Monivong, Oswald Mosley, Ashikaga Yoshimitsu, and Jacobo Árbenz. After him are Menahem, Takahito, Prince Mikasa, King You of Zhou, Prince Louis, Duke of Nemours, Sancho VII of Navarre, and Yang You.