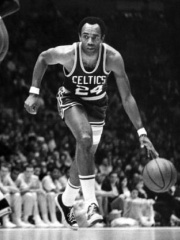 Samuel Jones (born June 24, 1933) is an American former professional basketball player at shooting guard. During his playing career, he was known for his quickness and game-winning shots, especially during the NBA Playoffs. He has the second most NBA championships of any player (10), behind his teammate Bill Russell (11). He was also one of only 3 Boston Celtics (along with teammates Bill Russell and K. C. Read more on Wikipedia

Since 2007, the English Wikipedia page of Sam Jones has received more than 55,407 page views. His biography is available in 21 different languages on Wikipedia making him the 72nd most popular basketball player.