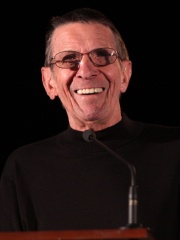 Leonard Simon Nimoy (; March 26, 1931 – February 27, 2015) was an American actor, film director, photographer, author, singer, and songwriter. He is known for playing Spock in the Star Trek franchise, a character he portrayed in television and film for almost fifty years, from a pilot episode shot in late 1964 to his final film performance in 2013.Nimoy began his career in his early twenties, teaching acting classes in Hollywood and making minor film and television appearances through the 1950s, as well as playing the title role in Kid Monk Baroni. Foreshadowing his fame as a semi-alien, he played Narab, one of three Martian invaders, in the 1952 movie serial Zombies of the Stratosphere. Read more on Wikipedia

Since 2007, the English Wikipedia page of Leonard Nimoy has received more than 7,600,509 page views. His biography is available in 66 different languages on Wikipedia making him the 244th most popular actor.