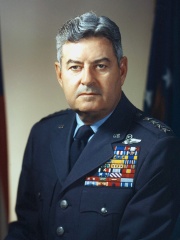 Curtis Emerson LeMay (November 15, 1906 – October 1, 1990) was an American Air Force general who implemented an effective but controversial strategic bombing campaign in the Pacific theater of World War II. He later served as Chief of Staff of the U.S. Air Force from 1961 to 1965. LeMay joined the U.S. Army Air Corps, the precursor to the U.S. Air Force, in 1929 while studying civil engineering at Ohio State University. He had risen to the rank of major by the time of Japan's Attack on Pearl Harbor in December 1941 and the United States's subsequent entry into World War II. He commanded the 305th Operations Group from October 1942 until September 1943, and the 3rd Air Division in the European theatre of World War II until August 1944, when he was transferred to the China Burma India Theater. Read more on Wikipedia

Among politicians, Curtis LeMay ranks 5,987 out of 15,710. Before him are Cunipert, Virginia de' Medici, İsa Çelebi, Qapaghan Qaghan, Grimoald the Younger, and Leo V, King of Armenia. After him are Gaius Claudius Marcellus Minor, Louis, Prince of Hesse and by Rhine, Saad Al-Salim Al-Sabah, Abba Eban, Charaton, and Fu Jian.