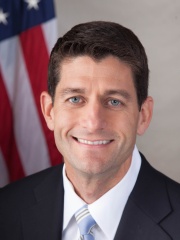 Paul Davis Ryan (born January 29, 1970) is an American retired politician who served as the 54th speaker of the United States House of Representatives from October 2015 to January 2019. He was also the 2012 vice presidential nominee of the Republican Party, running unsuccessfully alongside Mitt Romney. Ryan, a native of Janesville, Wisconsin, graduated from Miami University in 1992. He spent five years working for Republicans in Washington, D.C. Read more on Wikipedia

Since 2007, the English Wikipedia page of Paul Ryan has received more than 9,581,843 page views. His biography is available in 50 different languages on Wikipedia making him the 6,618th most popular politician.

Among politicians, Paul Ryan ranks 6,578 out of 14,801. Before him are Nguyễn Khánh, Xiao Xin, Marie Harel, Adherbal, Bechara El Khoury, and Elijah Muhammad. After him are Kâzım Karabekir, Emperor Jingzong of Liao, Publius Mucius Scaevola, Dervan, Emperor Xingzong of Liao, and Gavril Radomir of Bulgaria.