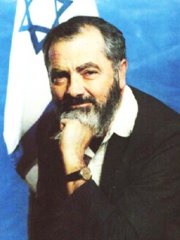 Rabbi Meir David HaKohen Kahane (; Hebrew: רבי מאיר דוד הכהן כהנא ; August 1, 1932 – November 5, 1990) was an Israeli-American ordained Orthodox rabbi, writer, and ultra-nationalist politician who served one term in Israel's Knesset. His legacy continues to influence militant and far-right political groups active today in Israel.Kahane publicized his "Kahanism" ideology, which he claimed was simply Torah Judaism based on halakha (Jewish law), through published works, weekly articles, speeches, debates on college campuses and in synagogues throughout the United States, and appearances on various televised programs and radio shows. He was an intense advocate for Jewish causes, such as organizing defense squads and patrols in Jewish neighborhoods and demanding for the Soviet Union to "release its oppressed Jews". Read more on Wikipedia

Since 2007, the English Wikipedia page of Meir Kahane has received more than 989,534 page views. His biography is available in 24 different languages on Wikipedia making him the 4,229th most popular politician.

Among politicians, Meir Kahane ranks 4,206 out of 14,801. Before him are Michael Hainisch, Eduard Limonov, Eleanor of Alburquerque, Paolo Gentiloni, Maeda Toshiie, and Muzio Attendolo Sforza. After him are Al-Muhtadi, Emperor Zhaozong of Tang, Mark Rutte, Al-Mu'izz li-Din Allah, Felix Kersten, and Mithridates I of Pontus.