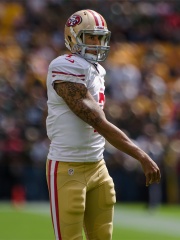 Colin Rand Kaepernick ( KAP-ər-nik; born November 3, 1987) is an American civil rights activist and football quarterback who is a free agent. He played six seasons for the San Francisco 49ers in the National Football League (NFL). As a political activist, he knelt during the national anthem at the start of NFL games in protest of police brutality and racial inequality in the United States.Kaepernick played college football for the Nevada Wolf Pack, where he was named the Western Athletic Conference (WAC) Offensive Player of the Year twice and became the only player in NCAA Division I FBS history to amass 10,000 passing yards and 4,000 rushing yards in a career. Read more on Wikipedia