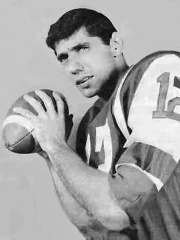 Joseph William Namath (; born May 31, 1943), nicknamed "Broadway Joe", is an American former professional football player who was a quarterback in the American Football League (AFL) and National Football League (NFL) during the 1960s and 1970s. He played college football for the Alabama Crimson Tide under coach Paul "Bear" Bryant from 1962 to 1964. Namath was an AFL icon and played for that league's New York Jets for most of his professional football career. Read more on Wikipedia

Since 2007, the English Wikipedia page of Joe Namath has received more than 6,136,396 page views. His biography is available in 16 different languages on Wikipedia making him the 8th most popular american football player.