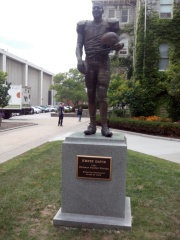 Ernest Davis (December 14, 1939 – May 18, 1963) was an American football player, a halfback who won the Heisman Trophy in 1961 and was its first African-American recipient.Davis played college football for Syracuse University and was the first pick in the 1962 NFL Draft. Selected by the Washington Redskins of the National Football League (NFL) in December 1961, he was then almost immediately traded to the Cleveland Browns and issued number 45. Davis was diagnosed with leukemia in the summer of 1962, and died less than a year later at age 23, without ever playing in a professional game. He was inducted into the College Football Hall of Fame in 1979, and was the subject of the 2008 Universal Pictures film The Express: The Ernie Davis Story, based on the non-fiction book Ernie Davis: The Elmira Express, by Robert C. Read more on Wikipedia

Since 2007, the English Wikipedia page of Ernie Davis has received more than 2,428,842 page views. His biography is available in 15 different languages on Wikipedia making him the 5th most popular american football player.